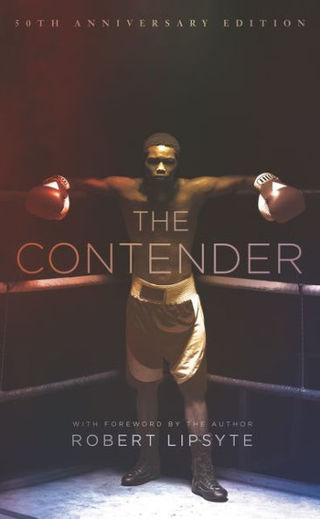 He waited on the stoop until twilight, pretending to watch the sun melt into the dirty gray Harlem sky. Up and down the street transistor radios clicked on and hummed into the sour air. Men dragged out card tables, laughing. Cars cruised through the garbage and broken glass, older guys showing off their Friday night girls. Another five minutes, he thought. I'll give James another five minutes.

"You still here, Alfred?" Aunt Pearl came out on the stoop, her round face damp from the kitchen.

He tried to sound casual. "You know James. He better hurry or we'll miss the first picture."

"He's never been this late, Alfred. Why don't you go upstairs and call his house? Maybe he's sick."

"How you know that?" Her eyes narrowed. "You know where he's at?"

"He's hangin' out with those worthless punks, ain't he, Alfred? Maybe you just better . . . Alfred!"

But he was already off the stoop and moving fast, his sneakers slapping on the sidewalk. Packs of little kids, raggedy and skinny, raced past him along the gutter's edge, kicking empty beer cans ahead of them. Used to do that too, when we were little, he thought. One thing I could always do better than James. I was always faster. Big deal. He slowed down.

He stopped at the mouth of the alley, and took a deep breath. What am I, James' shadow or something? I don't need him. But he marched to the basement steps, and plunged down into the clubroom.

Hollis and Sonny were sprawled on the long, sagging couch, snapping their fingers to a scratchy record. Major was flexing his arm muscles at the cracked mirror over the mop sink. Only James, trying to read a magazine in the dim light of the naked bulb, looked up.

"Nothing much," said Alfred. "Ready to go to the movies?"

"Not unless it's free night," said James.

I got some money," said Alfred.

Major turned slowly and let his muscles relax. "How much you got, Alfred?"

"Nothing," mumbled Alfred, staring down at the tips of his sneakers.

"You the only one workin', and you got paid today," said Major. "What you got?"

"Gave it to my aunt," said Alfred.

"Gave it to my aunt,"' mimicked Major. "You such a good sweet boy. Old Uncle Alfred."

"Don't you know this club has got dues?" Major folded his arms across his bulging T-shirt.

Hollis leaned back in the couch. "Go collect the dues, Sonny. Turn Alfred upside down and make the dues fall out his pockets."

"Turn Alfred upside down," echoed Sonny, blankly. He stood up, taller than any of them and almost as heavily muscled as Major. "Upside down."

"Hold on," said James. "Alfred's my guest. I invited him to come down."

Major swaggered across the room, the metal tips on his pointed shoes clicking on the concrete floor. "How much them Jews give you for slavin', Uncle Alfred?"

"Jews squeeze the eagle till it screams," said Hollis. "The eagle screams, 'Faster, Alfred, sweep that floor, you skinny nigger.'"

"They been all right to me," said Alfred.

"How come you ain't workin' right now?" said Major, circling until he stood between Alfred and the door.

"They close early on Friday to go to synagogue."

"No," said Alfred. "The Epsteins are very religious. They don't even touch money after sundown on Fridays."

"No. They even leave money in the cash register so they won't have to . . ." He bit his lip. Water dripped into the mop sink, small explosions in the suddenly silent room.

"Let's get it," whispered Hollis.

"You just a slave," sneered Major. "You was born a slave. You gonna die a slave."

I see you now, boy, old and stooped," said Major, shuffling to the center of the room. "Old and stooped. You be scratching your head and saying, 'Yassuh, Mistuh Lou, lemme brush them hairs offen your coat; yassuh, Mistuh Jake, I be pleased iffen you 'low me to wash your car.'"

Sonny and Hollis began to laugh as Major shuffled around the dim, warm room, his muscular arms dangling like a monkey's, his eyes rolling, his black head bobbing in ugly imitation of an old-time Negro servant. I can see you now, Alfred, good old Uncle Alfred. 'Yassuh, Mistuh Ben, I be so grat-i-fied iffen you'd kick me now and again, show how much you white folks love us."'

The laughter rose, high-pitched and nervous. Alfred peeked at their faces, black and sweating in the semicircle around him. Hollis and Sonny, grinning and nodding. James' chubby face was set and unsmiling as Major continued his imitation, scratching his nose, pouting his lips, and shambling loosely like a puppet at the end of jerking strings.

"We don't need him if he's scared," said Hollis.

"He isn't scared, not him," said James. "Look, Alfred, you don't owe them anything."

"They gave me a job," said Alfred, surprised at how far away his own voice sounded.

"Yassuh," yelled Major, shuffling back into the center. "'Mistuh Lou, I been sweepin' out your store forty year now, how 'bout lettin' me de-li-ver groceries on the bi-cy-cle oncet in a while?"'

Alfred swallowed hard. "They was the only ones gave me a job when I quit school," he yelled.